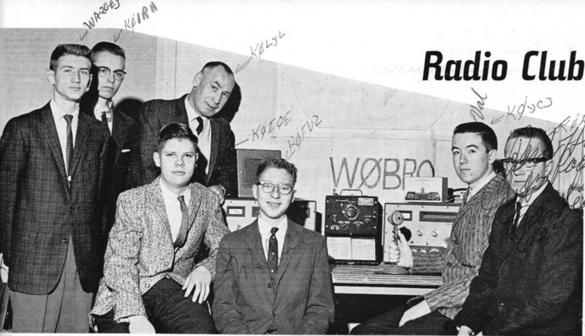 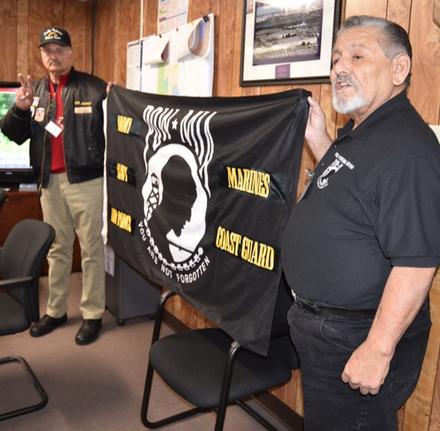 Congratulations to Tom McKenna (a.k.a. Shoes McKenna) who, as of April 25, 2016, is a published author! His photographic journey of the Wet Mountains, steeped with history, heritage, and culture dating back to the very first people in North America, includes 343 pages that include 100 photographs and scores of interesting facts about the land and its inhabitants while taking you on a journey with a fictional family, The Jades. The book is available on the Kindle for a cost of $3.99.  Way to go, Tom!

Since taking up watercolor painting in 2013, Sheryl Hutchings has been getting in touch with her inner artist.  She recently had two of her original paintings accepted into a juried show at the Deep Space Gallery in Parker, Colorado.  One of the two paintings sold!  Thanks to Sheryl for sharing this photo taken with her grandsons at the show's opening reception on April 7, 2016.  Since this time, Sheryl has had several other paintings juried into shows in the Denver/Parker area. 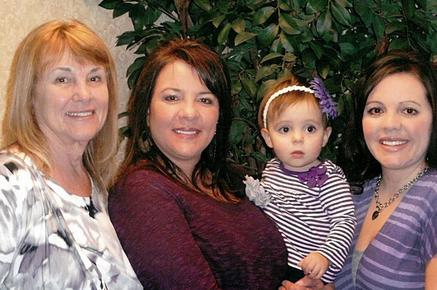 IN THE PUEBLO CHIEFTAIN!

Classmates making big news in Pueblo in 2018 include Jim Beal, Ruth Power Taravella, and Bennie Carrico Swanson, each of whom was the subject of a Pueblo Chieftain community profile feature story.  The Chieftain's "Local News" section added a GENERATIONS feature story on a regular basis which focuses on Puebloans who are doing the same job in Pueblo that their parent or grandparent or great-grandparent did. To see each of the published stories on these classmates, click on the button bearing his or her name! 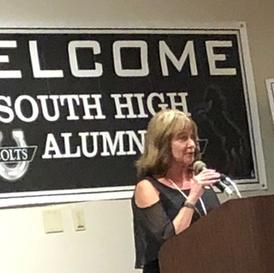 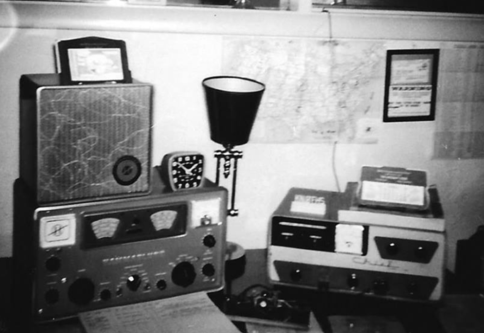 As President of Pueblo POW/MIA Memorial, Butch Chavez selected to receive the POW Flag 50 State Tour traveling flag in honor of our POW/MIA's
The 2019-2020 POW flag 50 State Tour started its journey at Overlook Park in Cedar Bluff, VA where a new Memorial was built in remembrance of 82,000 POW/MIA’s that are still unaccounted for. The flag, which is currently being escorted by Butch Chavez, President of Pueblo POW/MIA Memorial and Lt. Col. (Ret) John Saenz, arrived at Pueblo Chemical Depot for a photo with PCD leadership and signature from COL Cobb, Ms. Sheila Johnson and Mr. Clyde Brown, which documents the flags journey.

Ham Radio Buddies Still Connecting After All These Years

A ham radio is neither small or portable, but for operators who love the chatter, it is a reliable way to dial in to a long distance conversation.  Hams are active in nearly every country in the world, and some radios are more than 100 years old.  Not Richard's or Lee, of course!

We have added a new feature which, we hope, will make it possible for all classmates  ​to share updates about themselves.  Think of it as our own customized Facebook page!

We don't know your news unless you notify us, so...

if you have news and photos you would like to share, please send both in an email to Sheryl Hutchings to post on this "News from Classmates" page.

Sheryl's email address is sahutch@me.com. Digital photos are preferred, but if that's not possible, send Sheryl a photographic print by snail mail to 21941 E. Canyon Place, Aurora, CO, 80016.  Photographic prints will not be returned, so make sure it's not your only copy! 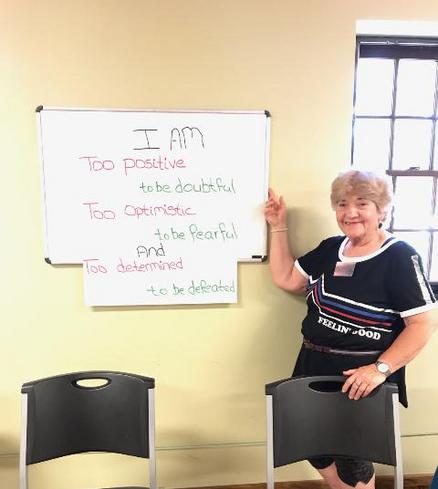 Six decades ago, classmates Richard Montoya and Lee Francis got to know one another in South High School's Radio Club. They were both studying electronics, and after high school, they both went on to get their ham radio licenses.  That time spent in Radio Club turned out to develop into a life-long conversation.  These two old ham operators are still connecting via their radios every Wednesday, joined by two other South graduates from the Class of 1962, Val Erwin and Frank Bregar.

Lee Francis is retired from the federal government and lives in Maryland.  Richard Montoya is a retired engineer and lives in California. Val Erwin, a retired electronics engineer, lives in Texas, and Frank, who was a music teacher, lives in Fruita, Colorado. 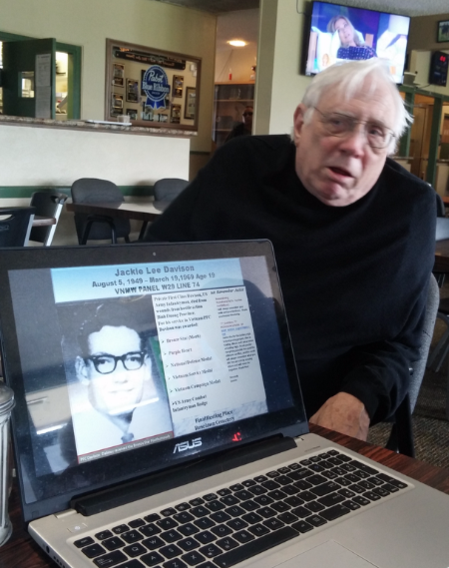 OTHER NEWS FLASHES ABOUT CLASSMATES

Old neighborhood friends Jennifer Bryant Greiner, Sheryl Hutchings, and Michelle Stacks Keown celebrated a mini-reunion of their own on Wednesday, February 10, 2016, when they met for lunch in Castle Rock.  Michelle and Jennifer had not seen each other since their sophomore year in high school when Michelle moved to Japan after having attended 7th, 8th, and 9th grades at Corwin.  She lives in Ft. Myers, Florida, but visits her daughter in Parker at least once a year, and she and Sheryl always meet for lunch when she's in town.  Jennifer, who lives in Fountain, drove up this time to join the celebration and share many memories from those middle school years! 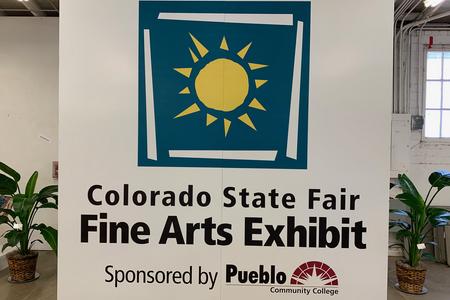 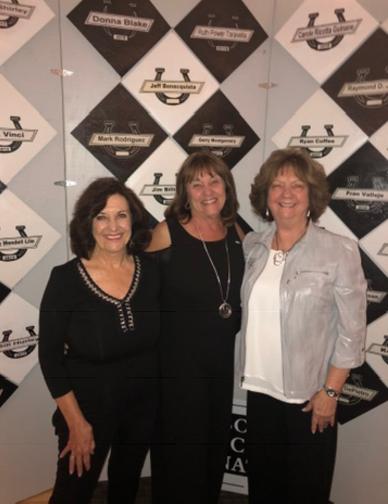 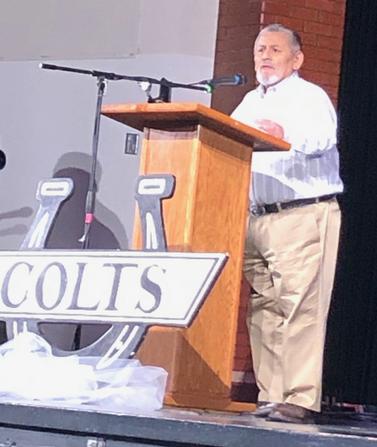 Joanne Cortese, pictured on the far left, and Carol Costanza Cullen, pictured second from the right, also joined in the celebration. 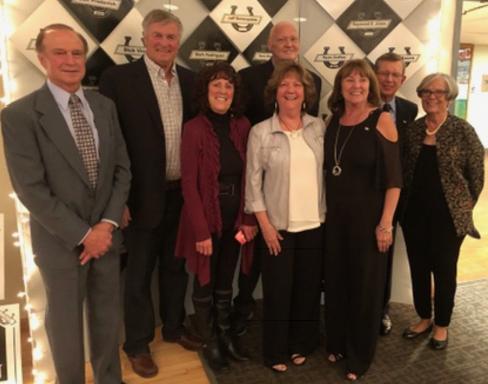 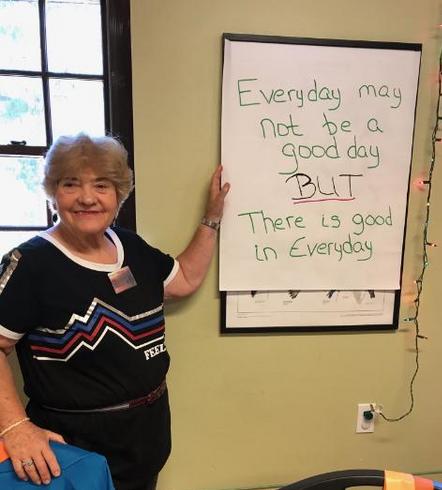 Tom has also spent a great deal of time preparing a presentation that he put together for the Roselawn Cemetery Board of Pueblo's Viet Nam casualties.  Roselawn is going to be doing a wall at the cemetery to honor them, and Tom, who has done all of the research on these heroes, plans to write another book regarding these casualties of war. 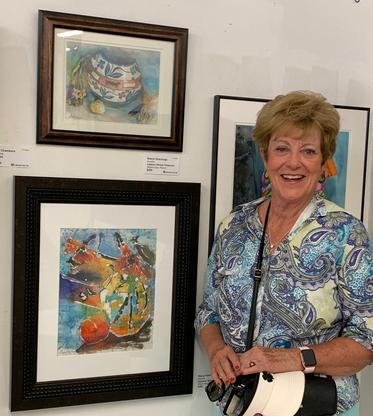 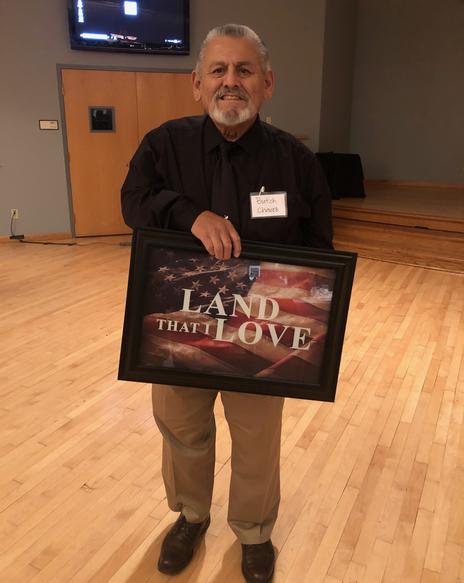 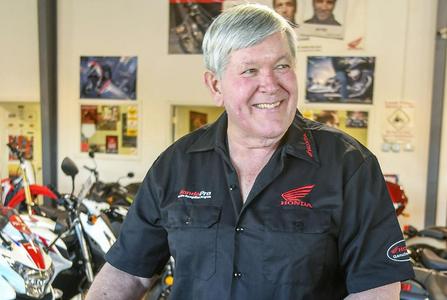 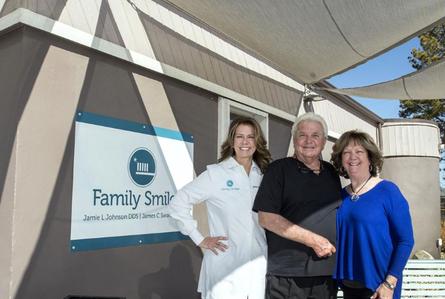 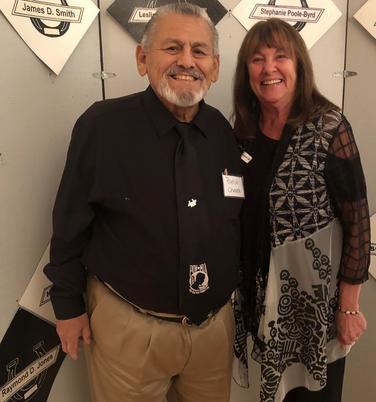 Classmatte Linda Willett shared a couple of pictures from a workshop she participated in as part of a new job she has started selling a product called Pure Trim.  She really believes it has helped her.  Her phone number is 719 994-9338 if you are curious to know more about it. 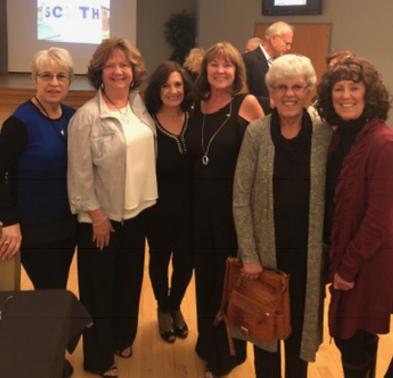 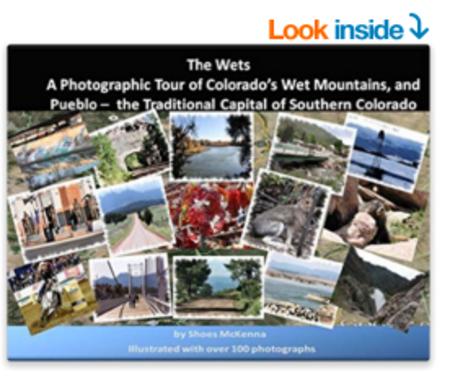 To read the Chieftain's story about Ruth and the other three 2018 inductees, click on this button.

Claude "Butch" Chavez, Veterans Advocate/Vietnam Vet 1966
Founder/Co-Chairman Pueblo POW/MIA Memorial™ was inducted into the Pueblo South High School Alumni Foundation Hall of Fame on October 26.  The ceremony and dinner was from 5 to 10 p.m. at Pueblo Community College.  Ten of his fellow classmates, including Ruth Power Taravella, an inductee in 2018, joined him in celebrating this honor.  On Friday, October 25, Butch spoke at the pep assembly in the South High School auditorium. 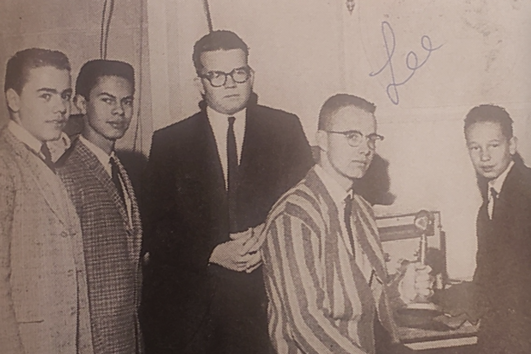 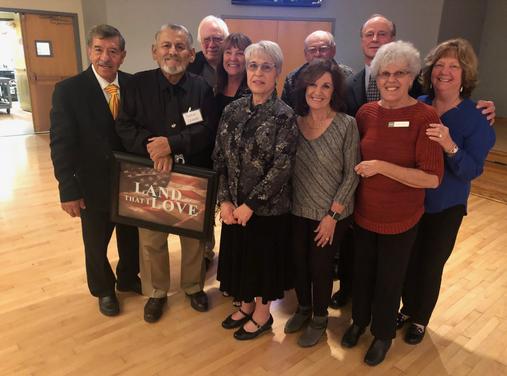 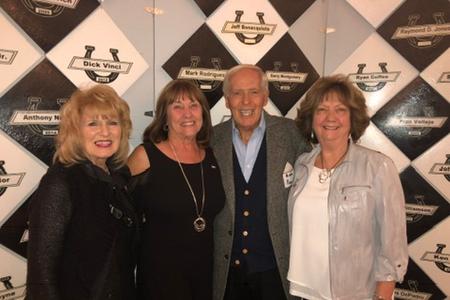 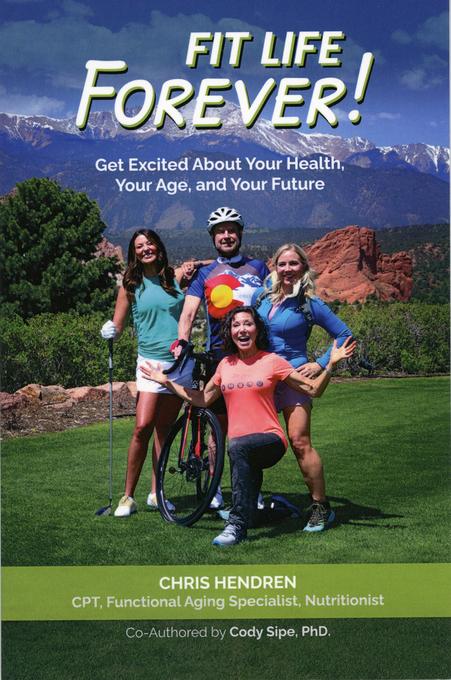 Sheryl Hutchings was proud to pose with her two paintings that were accepted into the 2019 Colorado State Fair.  A budding artist at this late stage of her life, she enjoys painting and is thrilled to be getting recognition for her works. 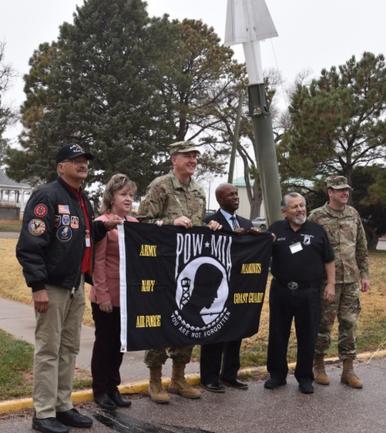 Ruth spent her career in education.  She was a teacher at Vineland Middle School, where she was awarded the first Distinguished Teachers Award.  She earned her M.A. in Education Administration, K-12 from CSU.  She next taught at North Mesa Elementary, then became D-70’s coordinator of Staff Development.  Named the first female high school principal for the District in 1997, she oversaw construction of Pueblo West High School which opened with 198 students and grew to a student body of 1,003 at the time of her retirement in 2004.  Since retiring she has mentored principals throughout Colorado before becoming the Central High principal in 2011-12 during the search process. Central won the Lamp of Knowledge trophy for the first time that year.  Ruth is also is active in her church.

The Story Behind the Picture

I’ve been riding a bike since I was a kid, but I started riding regularly when I went to Moab with a group of guys in 1997.  I’ve gone back nearly every year since and most times twice a year.  The bike riding added a heart/lung element to gym workouts that I started nearly 15 years earlier.  I do well with the other riders, most of them 10 to 20 years younger.  You might say these guys help keep me fit because I’m competitive and don’t want to be left behind. We do road bike rides as well as mountain bike rides.

A couple years ago I started feeling that I needed to update my gym workouts.  I hadn’t changed basically what I was doing in about 20 years and thought it would be useful to have someone take a look at what exercises and recommend a better workout.  By coincidence while I was at my local gym I was approached by Chris Hendren, a personal trainer, while working out. She probably thought, ”Here’s a guy that needs some help.”   She gave me some tips about adding flexibility exercises to what I was doing and suggested starting training with her.  I was interested as I found that she had competed in triathlon so she was familiar with training with cycling in mind.  After some thought I signed up for a three month personal training regimen with Chris, meeting twice a week.  I knew I didn’t want a 30 year old body builder as my trainer and Chris’s combination of focus on age appropriate exercises and experience with cycling tipped the scales to working with her.

The first thing Chris did was take a look at the exercises I’d been doing, finding that some of the machine-based exercises were probably harming my aging joints, particularly my knees.  As we started, I found that I struggled with balance exercises as well.  She designed a set of workouts that strengthened my core and improved my balance, for cycling, and provided better overall body fitness, while being easier on my joints.  Chris is also a certified nutritionist and she provided some tips on what I was eating to improve my health. Number one was to eat more protein. As a cyclist I focused on carbohydrates, but she said I needed more protein because as we age we don’t process protein as well as when we were young. I needed to nearly double my protein intake! This nutrition advice was an unexpected side benefit of working with her.

One valuable part of the workout Chris designed is that it uses small weights, resistance bands, and body weight for most of the workouts.  Our three month course was interrupted in the spring of 2020 with Covid-19 closures of gyms.  The fact that I could continue working out at home with the small weights and resistance bands I had was great at maintaining my fitness.  We were able to resume our training  mid-year as the gyms reopened.

Since working with Chris I’ve maintained the training exercise Chris developed for me, but I found that I’d also gained a friend and I’ve stayed in touch with Chris.  When she told me she was writing a book about fitness training and would like to have me pose for a cover photo with some other of her clients I was thrilled and you see the result here.  It was fun to do the photo session, meeting Chris’s other clients, Stephanie, to my left, and Lisa, to my right.  Their stories of working with Chris are similar to mine. The title of Chris’ book is “Fit Life Forever!” and I certainly feel like she’s helping me with that!  Being on a book cover is just a bonus!