JOIN US TO CELEBRATE
THREE QUARTERS OF A CENTURY! 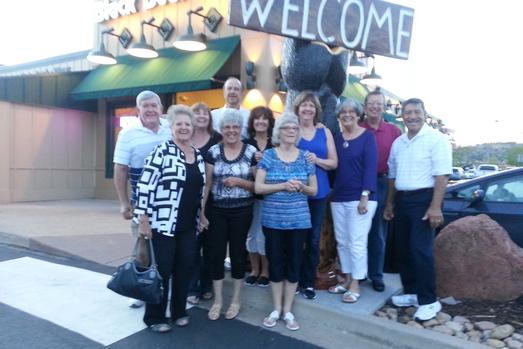 The Class of 1964’s Semi-Annual 2018 Birthday Party!
It was time to celebrate classmates whose birthdays occur in the months of July through September! The celebration took place on Thursday, October 25, 2018, at AJ’s Restaurant at Walking Stick Golf Course.​​  ​​For those who live far away, we knew you probably could not attend, but we wanted you to know you were invited and you were in our thoughts as we celebrated.

Classmates celebrating 71st birthdays in the spring of 2017 were honored at a Quarterly Birthday Dinner in Pueblo on May 27, 2017.  Garlic and Onions Restaurant on Thatcher Blvd. near City Park hosted the celebration which was attended by one of the larger groups to enjoy celebrating yet another milestone together.

The committee apologizes to those who had birthdays in the summer and autumn of 2017.  We just could not get our act together to plan those! 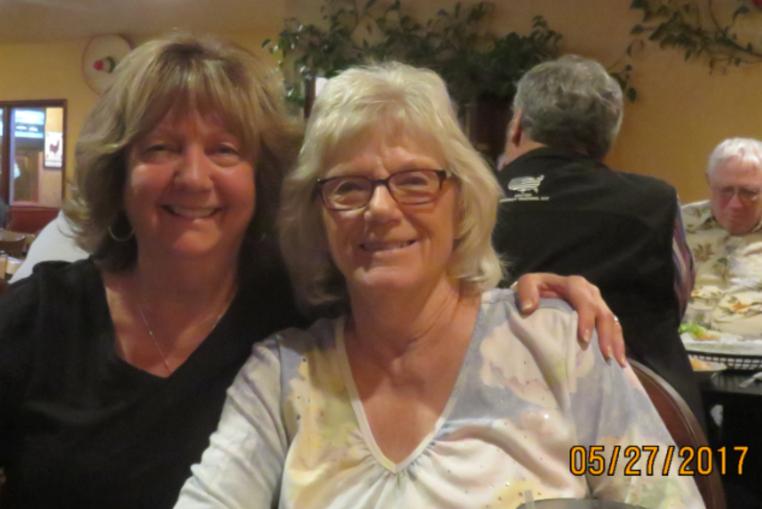 Here's a look at some birthday dinner celebrations from previous years...

A 2019 class birthday dinner took place on Thursday, April 25, 2019, at 5:30 p.m. at the Black Bear Diner on Garden of the God’s Rd. in Colorado Springs.  The Black Bear had a separate party room that held up to 30, so reservations were on a first come, first served basis. Those who attended included Jim Beal, Roberta Palacio, John Reinert, Ruth Taravella, Carol Cullen, Sharon Griffin, Jennifer Greiner, Bennie Swanson, Ruth and Sam Bole, and John Sandoval.  Not pictured is Sheryl Hutchings who took the picture! 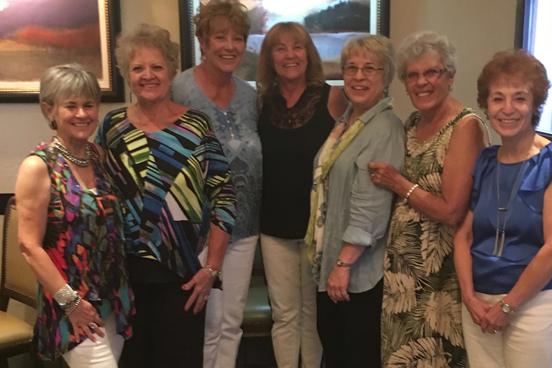 The celebration of March, April, and May birthdays in 2016 took place on Saturday, May 21, 2016, at 5 p.m. at the Black Bear Diner in Colorado Springs.  Posing for a picture below are eleven of your classmates who attended:  Roberta Palacio, Ruth Taravella, Carol Cullen, Sharon Griffin, Jennifer Greiner, Bennie Swanson, Ruth Renck, Jim Beal, John Reinert, Sam Bole, and John Sandoval.

The highlight of our 2016 group birthday celebrations took place in Las Vegas in October of 2016 as we gathered to celebrate our 70th birthdays in unison.  See the "Celebrating Together" page for special coverage of that momentous event! 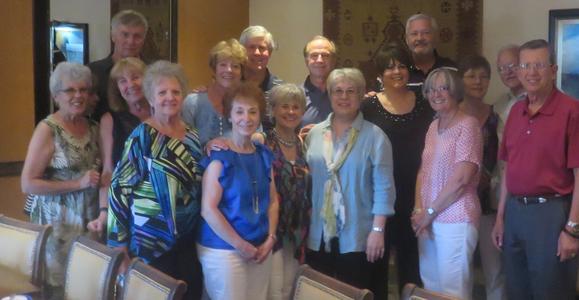 Quarterly Dinner in the Spring of 2016 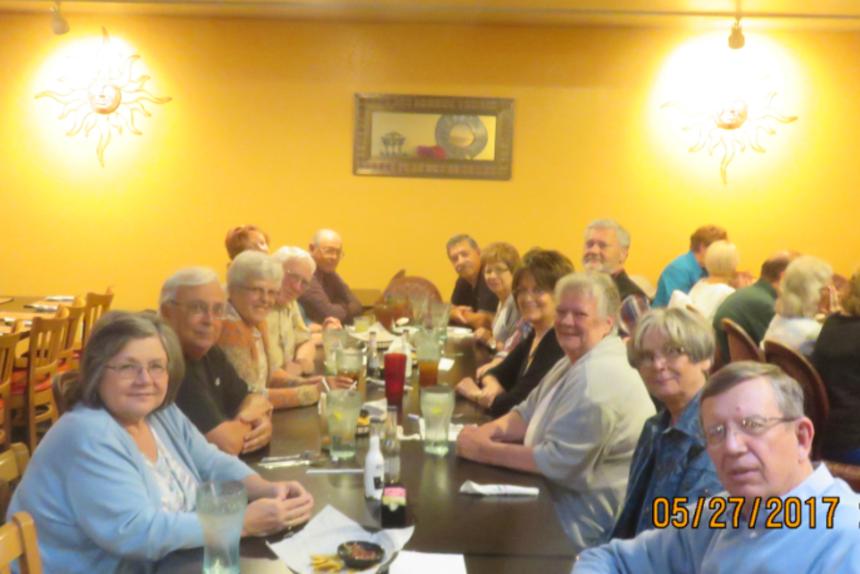 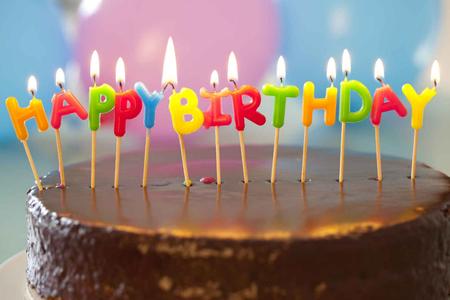 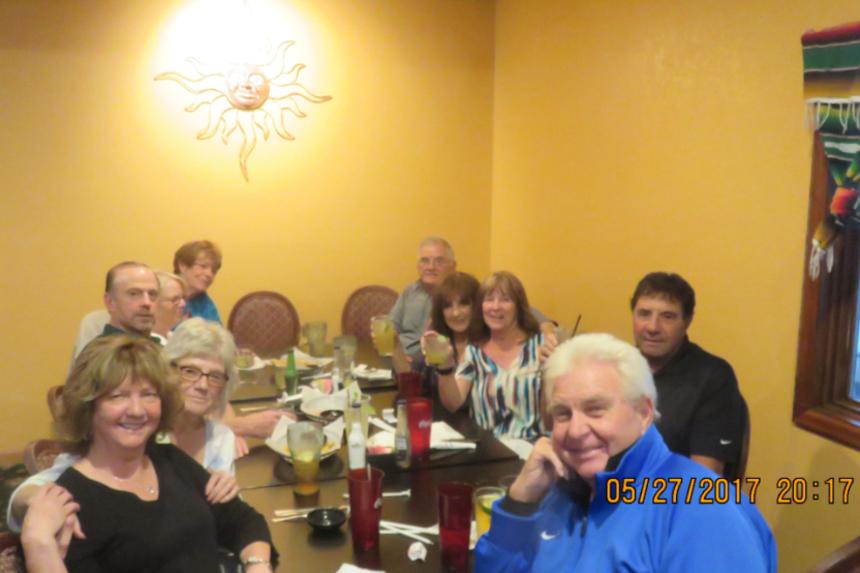 The food was good, the company was great, and the evening was filled with lots of catching up and sharing of memories.  Those of you who couldn't attend missed a really good time!

​​A total of twenty-one people attended, including classmates and their spouses or guests. They included Lanny Carlson and his wife Susie from Glenwood Springs, Lester Garrett and his wife Janice from Lone Tree, Gary Trujillo and his wife Yumi, now living in Aurora, Sam Bole and his wife Ruth Renck Bole from Colorado Springs, Nola Snyder Stofac and her husband Ken from Albuquerque, New Mexico, MaryJo Valenti Jones and her husband Dave from Thornton, John Reinert from Colorado Springs, Roberta McMichaels Palacio, Joanne Cortese, Carol Costanza Cullen, and Ruth Taravella, all from Pueblo, and Sheryl Hutchings and her guest Bill Foster, both from Denver. Bob Hirsch from Castle Rock and Pete Perez from parts unknown stopped by to visit but could not stay for dinner.

A quarterly birthday dinner to celebrate those classmates with 2016 birthdays in July, August, or September took place on Tuesday, August 16, from 4:30 to 7:30 p.m.at Hacienda Colorado in Lone Tree, Colorado just south of the Denver city limits. 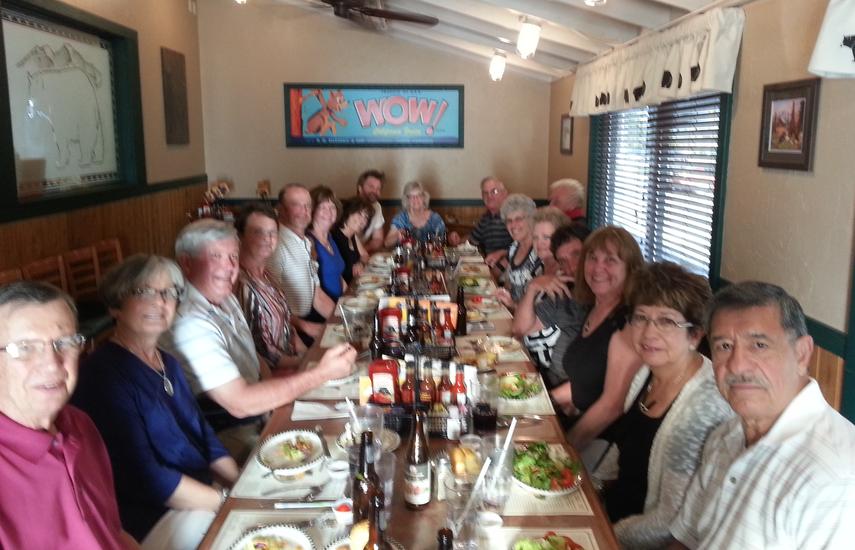 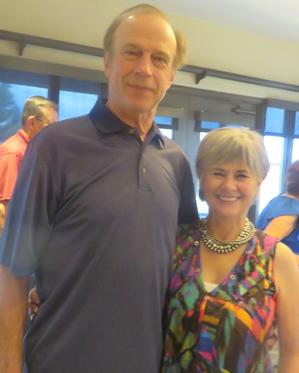